FINALIST OF THE INTERNATIONAL MUSIC PRIZE FOR EXCELLENCE IN COMPOSITION 2009 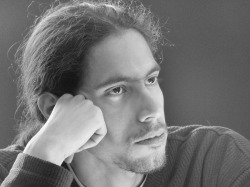 Mirtru Escalona-Mijares
Mirtru Escalona-Mijares was born in Venezuela in 1976. He studied with Rafael Saavedra and Gerardo Gerulewicz in his home country. José Manuel López-López and Paul Méfano invited him to continue his studies in Paris, where he has been living since 2000. In France, he received degrees in composition from the Music School of Blanc-Mesnil with Philippe Leroux, from the National Conservatory of Strasbourg with Ivan Fedele, and a degree in Electroacoustic Composition from the Music School of Pantin with Christine Groult. He is currently completing his Master in Composition and Music Computer Science at the Conservatoire National Superieur de Musique et Danse de Lyon with Robert Pascal, Michele Tadini, Denis Lorrain and staff members of the SONVS. He has attended the master classes of José Manuel López-López, Paul Méfano, Betsy Jolas, Sergio Ortega, Diogenes Rivas, Antonio Pileggi  and Jacopo Baboni-Schilingi. He has received scholarships from the Fundación Gran Mariscal de Ayacucho and the Cultural Nacional Council (Venezuela), the Conseil Générale de Seine Saint-Denis and the Centre Acanthes (France).

The copyright of this work rests with the composer and no quotation from it or information derived from it may be published without the prior written consent of the composer.

Fair Use of this Copyrighted Work

Fair use is a doctrine in United States copyright law that allows limited use of this copyrighted work without requiring permission from the copyright holder, such as for criticism, comment, news reporting, teaching (including multiple copies for classroom use), scholarship or research. Whenever such a copy is made it must bear on the first page of the music the copyright line which appears at the beginning of the work.

For more information on fair use please visit the US Copyright Office.